The aroma in the men’s changing room at the fitness club where I go isn’t something I particularly want you to have to imagine.

At the most acceptable end of the scale are some fairly unpleasant and toxic aftershaves, and from there it is downhill all the way. You really don’t want to know…

(They are a curious bunch of members too, an interesting cross section of humanity, and a wide age range. Looking around I always wonder why most of the weightlifters and bodybuilders are Slavs? Any idea why? Answers on a postcard please to V. Putin, c/o The Kremlin.)

Obviously there is one fragrant beacon which cuts through this cacophony of dark aromas, and that is my kitbag, which emanates a delightful blend of thyme linalol and some other aromas from high Provence.

The other day I was chatting with someone I vaguely know from a yoga class. We were moaning a bit about why the yoga teacher feels it necessary to talk such a lot during postures instead of allowing us to be silent (no chatter during ‘down dog’ please) and he commented on my fragrant kit bag.

When I told him I have an essential oil company he commented: ‘Gosh, you are really in touch with your feminine side, aren’t you?’

Now I used to play rugby and I didn’t really know how to react to this. Was it a compliment or an insult? Did it warrant a withering glance, or a cheerful ‘Thanks Mate’? 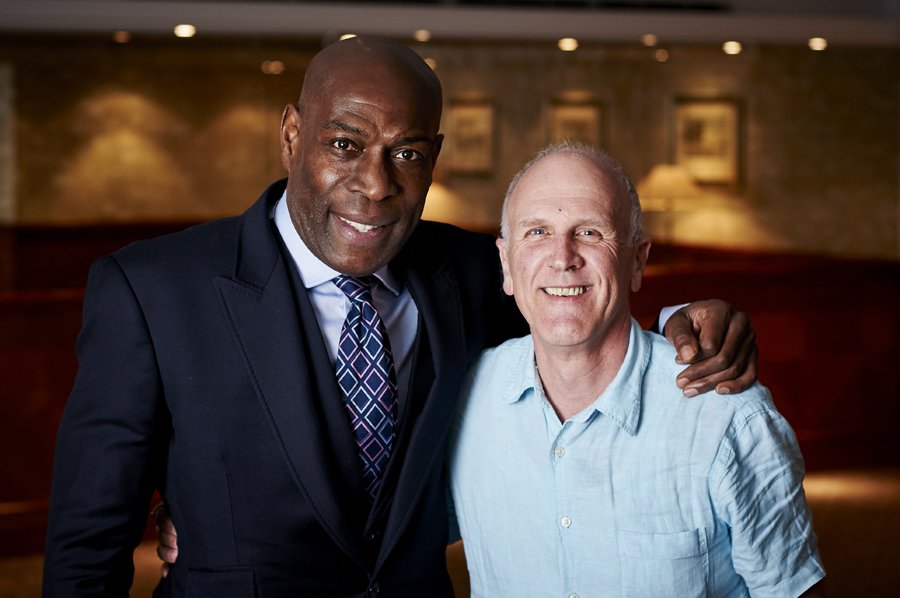 Two Real Guys!
Here’s a photo of me with former WBC World Heavyweight Boxing Champion Frank Bruno. No doubt you will be trying to work out which is me and which is Frank, so just to clear up the confusion, Frank is marginally taller, and I am the one on the right (in the blue shirt). Ok? 🙂 (Incidentally Frank is the sweetest gentlest guy you could ever ask to meet.)

Anyway, I went through a spectrum of different expressions, before finally giving him the benefit of the doubt and alighting on something fairly neutral; while he, blissfully oblivious to my dilemma, chuntered on happily and clearly none the wiser.

It did make me think though, ‘Why on earth should it be that being in tune with the sense of smell should be considered feminine?

According to Ayurveda, each of the senses corresponds to one of the five elements: Hearing is space, touch is air, sight is fire, taste water, while smell corresponds with the earth element, which is so lacking in many people’s lives. These are basic elementals, way beyond any temporary cultural gender biases or role plays.

In fact most of us are in need of the ‘grounding’ quality that this earth element gives that one could almost say that it is a universal lack. Paying attention to good quality natural aromas has a massive therapeutic effect.

A relative of mine is in a care home and she has recently started having regular aroma treatments. Old people are more deprived than most of us and even more in need of grounding and balancing.